Parading the suspects before newsmen on Friday November 23rd, the state commissioner of police, Edgal Imohimi, said one Anthony Lawani, lodged a complaint to the police that the body of his sister, 51 year old Mary Ehinlaiye which was deposited at the morgue was nowhere to be found. He had gone to the mortuary to collect his sister’s body for burial but the attendant’s could not present the body to him.

“However, one Olusesi Owamade, aged 41 years, a mortuary attendant, with the approval of his supervisor, Michael Olusegun, aged 65 years, erroneously released the corpse to another family. 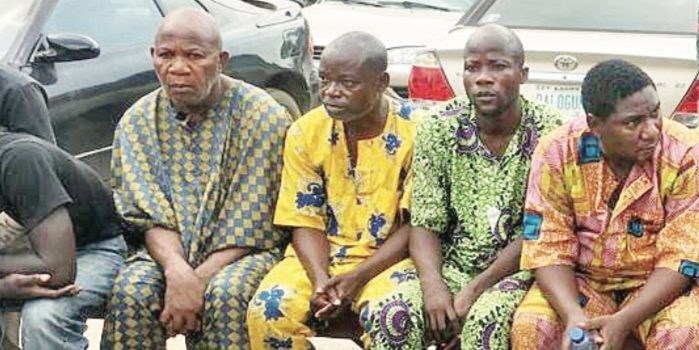 Edgal said the suspects, Michael Olusegun and Olusesi Owamade who are mortuary attendants and the five gravediggers identified as Razaki Abesopiti, Okeowo Kazeem, Babatunde Giwa, Ade Aliu and Musiliu Yakubu, conspired among themselves and dismembered the body of the deceased by cutting off the two wrists and heart for a yet-to-be determined reason.

“Investigation into this case is in progress, while efforts are on to arrest one of the grave diggers named Anifowoshe, who is currently at large.

The case will be charged to court and case file forwarded to the Office of the Directorate of Public Prosecutions (DPP) for legal advice,” he said.

Corruption Has Gotten Worse Since I Left Office – Jonathan

If Obasanjo Had Been In Power Today, Insurgency Would Have Been...

Adekunle Gold Reveals The Inspiration Behind His Recent Single With Kizz...

Osinbajo Vs Obi: Fayose Reacts To Outcome Of Vice-presidential Debate

“I Was Confident Lagosians Will Choose Courage Over Fear” – Sanwo-Olu

ASUU Talks Tough Ahead Of Friday Meeting With INEC